Tharang I – ‘The British Route’
How beautiful, yet how worrying to rise from my pit to a vista of snow covered valleys and to the rocky peaks of yesterday, replaced and painted white with heavy windslab and ladened ridges.

Our night at 3,300m, in a lovely little farming community, brought a sleepless night, filled with the roar of thunder, flashes of light through our bedroom window and the constant scuttling of the resident rodents in the wall cavities next to my pillow. Though worse than this, our objective would now become more arduous and punishing with the amount of snow from these storms that seem to be raging throughthis beautiful corner of the India Himalaya.

We reached Urgos after a 26 kilometre hike up from our last village with supplies, Udaipur (2,700m), a beautiful hike through the river gorge and valley, with our brollies and regular tea stops, a lovely acclimatisation day. Urgos welcomes us, as have all the places on our travels so far, with open arms, a dry floor space in a friendly farmhouse, with hot tea and homemade fodder. The people here are so generous and caring, with nothing but smiles and curiosity.

We pack our kit and begin trail breaking up to Sukto. The going is wet, marred by landslides and torrents, the rain and snow continues through the morning toil. At Sukto we are ushered into a farmhouse, where we dry our souls and warm our hearts on sweet tea and hospitality above all expectations.

“I fear that conditions in the high mountains will be poor and perhaps too dangerous if there is no warmth from the sun to transform and consolidate all this new snow. Tough times ahead!” – Diary extract at Sukto, Tuesday 18th September 2012.

After much debate about the approach up the valley to Base Camp, we decide in the early afternoon, to set off and hope for a break in the weather. The mules make easy work of the heavy loads and after only a few hours we arrive at our base for the next few weeks. What should be a luscious oasis of green, resembles more like a scene from the depths of the Arctic!

Too wet and too tired to set up individual tents, we pile into the mess tent and bed down for the night, buzzing with excitement and eagerness to glimpse for the first time our peak and at last come face to face with our long awaited objective.

Daybreak brings with it blue skies, deep snow and a view up the valley towards our un-climbed peak, totally awesome!

After a brisk scoff and brew we pack our kit with extra gear to set up an advance camp, Camp 1. With a skip in our stride, we begin the trail breaking and load carrying. By midday we are at a good site for camp 1 at 4,300m, the only difficulty in getting here is a bad gully where the two lateral moraines meet, a massive risk of stone fall from above, we named it the ‘gully of doom’ and put fixed lines through it so as to speed up the descent and ascent out of it’s jaws. I leave the team to set up the tents and then to return to BC, while I continue up to the snout of the glacier to reccie and put a track into Camp 2. The going is tough, hot and sweaty, braking through a breakable crust in the snow pack and into the boulders below, up to my waist, but am rewarded with a wonderful site for Camp 2 and a clear view of the peak, later to be climbed and named “Tharang Fang” 5,490m. Slip sliding and tumbling back down past Camp 1 and down the mountain, I arrive back at Base Camp late in the evening, damp and tired, but full of excitement while Navim, our BC chef, feeds me endless quantities of sweet tea and chipatis.

What an amazing existence. For the next five days life mainly consists of eating, sleeping and ferrying loads, establishing Camp 1, Camp 2 and camp 3 at 5,450m the glacier below ‘Tharang 1’ (6,066m). Some of the crevasses on route are a little fragile and worrying in the afternoon heat, whilst the West Face looks like it could shed its load of snow at any moment. Camp 3 or ‘Summit Camp’ is in a truly remarkable location, but its surrounding slopes seem objectively serious from a combination of deep, fresh snow and with most corridors barred from hanging seracs.

On the 24th of September 2012, myself, Robin, Simon, Steve, Richie, Jacob and Luke, set off from Camp 2 up to Camp 3 and prepare for summit day. The plan is for myself to attempt a new route up a new peak, up the West Ridge of Tharang 1, with the two stronger and technically able climbers, Steve and Richie, whilst the others wait and rest for an attempt the following day. Our night at Camp 3 is both uncomfortable and sleepless. Robin become very ill and all night I worry for his well-being. The night is long and cold. The inside of the tent sparkles with the tiny crystals of frost as myself and Simon (Expedition Doctor) decide that he will evacuate Robin back down to BC and off the mountain to the nearest hospital, it is 2 am. At 3 am, Richie, Steve and I head off into the unknown, not much is said. We climb towards the West Col, the night is still, the sky, a canvas of mystery, casting a thoughtful eye on what seems a formidable peak. It’s a strange feeling, excitement, fear, fascination - a confused state of mind. The desire for adventure seems the only force at work as it drives us forward, up, over the gaping jaws of the rimaye and the next five pitches of ice climbing. At last, the skies glow a tint of red and the sun burns away all anguish and doubt. After three or four hours of front pointing and pitching, we reach the col, we pause for a moment, the first stop in a long while, to take in the beauty of our views to the South, very cool!

We set off up the West Ridge, bristling with rocks and needles, soon to arrive on the broad upper part of the ridge. A tiring and vulnerable snowy ridge sweeps up ahead of us, it presents both deep snow, but worse than this, an un-stable feeling of whether it will actually hold us all onto the mountain, or slide off into the abyss of the South Face below us. We climb slowly and gingerly, with the effects of the altitude making our progress slow and lethargic, when suddenly our senses are sharply awoken to the terrifying sound of a ‘whoof’ beneath our feet. In a dizziness of confusion, it seems we are still attached to the ridge, a warning perhaps. The will to push on overwhelms us and we continue, when after only a few more minutes, another heart stopping movement of the snowpack alerts us to the danger we are in. I recommend to the boys to stay put, it is obvious the ridge is about to avalanche. I quickly run all the rope out and head for the crest of the ridge in a hope that if the South face avalanches I could at least counterbalance the boys by jumping down the North Face. After what seems an eternity, I reach the haven of a rocky spur and with relief bang in a monster cam! At that point it becomes clear how close we’d been to disaster, as I glance beneath my feet to see not only a fracture line across the South side of the ridge, but a one metre high crown wall on the North side, with the whole of the North Face strewn across our approach tracks way down below us. The route we’d taken in at 3 o’clock this morning.

We take on the challenges of the upper rock band, the climbing is tricky and the way is not obvious, but at least we are off that gnarly snow ridge. After many hours of mixed climbing, suddenly there seems to be no more up! We all embrace on the tiny precipice, blown away with exhaustion and emotion.

But soon, I am faced with the daunting task of descending the same, snowy ridge. The day is getting hot and we move slowly from fatigue. I keep the boys on the cam for as long as the rope allows and the ridge lets us off, I whisper a little “thank you” to the mountain as we scramble down to the top of the Col. It’s getting really hot now and avalanches are popping out all around us. We begin the long abseils down the North side of the Col using abalakovs, finally arriving over the rimaye. Our approach track has disappeared under the tones of snow from the avalanche on the north side of the ridge. We make our way over the debris as quickly as our physical states allow. Summit camp is in sight and soon we are smothered in welcoming man hugs from Jacob and Luke, as we slump onto our packs and glance up at our mountain. It held our fate in its hands, allowed us to climb its secrets and touch its soul, blessed us with a summit and a safe passage, memories to cherish for a lifetime.

Our Route  – ‘The British Route’ tackles the West Ridge from the West Col. The route is graded at Alpine AD+. 1st Ascent – Mark Thomas, Steve Birch and Richie Mockler, on the 25th September 2012. The Mountain – ‘Tharang I – 6,066m.

Route Description
From BC, follow the moraine crest on the left side of the valley (east side), to where it drops into a stream ravine. Descend down into this (stone fall risk – fixed rope) and up the other side. Follow the moraine up and round to the right (west) up to a level area of boulders and stream junctions, Camp 1 (4,300m). From here go up and right (west) to gain the next moraine crest and follow it up and back left (east) to another flattening and stream, camp 2 (4,860m). From here go up the snow slope on the left (east) on the glacier below ‘Tharang fang’. Now head right (west), across boulders and scree onto the next glacier, up this to a rocky notch and the 1st view of the Tharang Mountains. Follow the glacier up and right (west) until arriving in the amphitheatre of Tharang I and Tharang III, underneath Tharang I’s North and West face. The col is clearly visible between the West Ridge of Tharang I and the East Ridge of Tharang III, Summit Camp (Camp 3).

Our climbing team and our support team were totally awesome. Thanks to Navim for his amazing cooking and warming smile. My embrace with Navim after seven days up at advance camps and summiting, was emotionally overwhelming, a true friend. Thanks also to the high altitude porters – Hiro, Govind and Mangle and of course, the best liaison officer we could have wished for – Gajendra, truly amazing.

In addition to Tharang I, our team also climbed the 1st ascent of ‘Tharang Fang’ or ‘Vishal Dant’ (5,490m), this peak is clearly visible from BC at the top of the valley leading up to Tharang I. The East Ridge was climbed on the 28th September 2012 by Mark, Claire, Paul and Simon, from Camp 1. 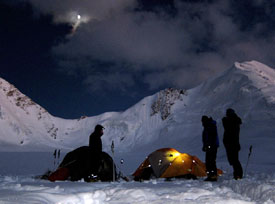 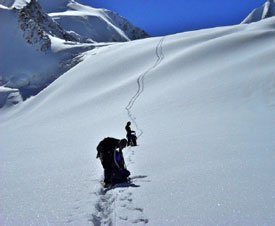 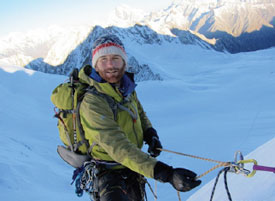 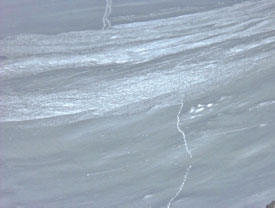 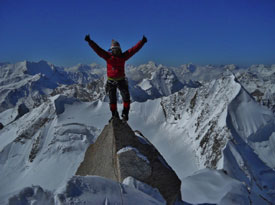 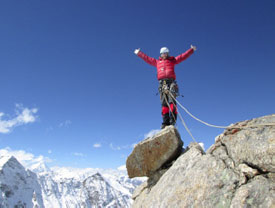